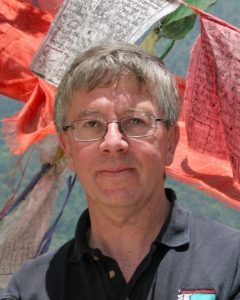 Doug Ritter is semi-retired orthopedic surgeon currently working Kemptville, Ontario and previously at the Queensway Carleton Hospital in Ottawa, Ontario. Doug graduated from medicine at Queens University in 1970. He did his internship at the Vancouver General Hospital following which he performed a locum in General Practice in Port Alberni BC. After traveling the world, he began a career in Emergency Medicine initially in Kitchener-Waterloo Ontario then Kingston, Ontario. As a general orthopedic surgeon, he has been mainly doing total joints for the past 30 plus years.

He currently participates in an orthopedic clinic in Pangirtung Nunavut. Doug has been volunteering since 2003, primarily in Bhutan. In Bhutan he taught orthopedic technicians a prescribed course done by multiple orthopedic volunteers rotating through almost monthly since 1998. He plans to return to Bhutan in September 2022, if the pandemic is controlled, volunteers are accepted and travel is safe and secure.  They now have a medical school with orthopedic residents and an Orthopedic training program. The Graduate Certificate in Global Surgical Care has provided him with an entirely new perspective on the volunteer experience. He wishes it had existed in 2000!