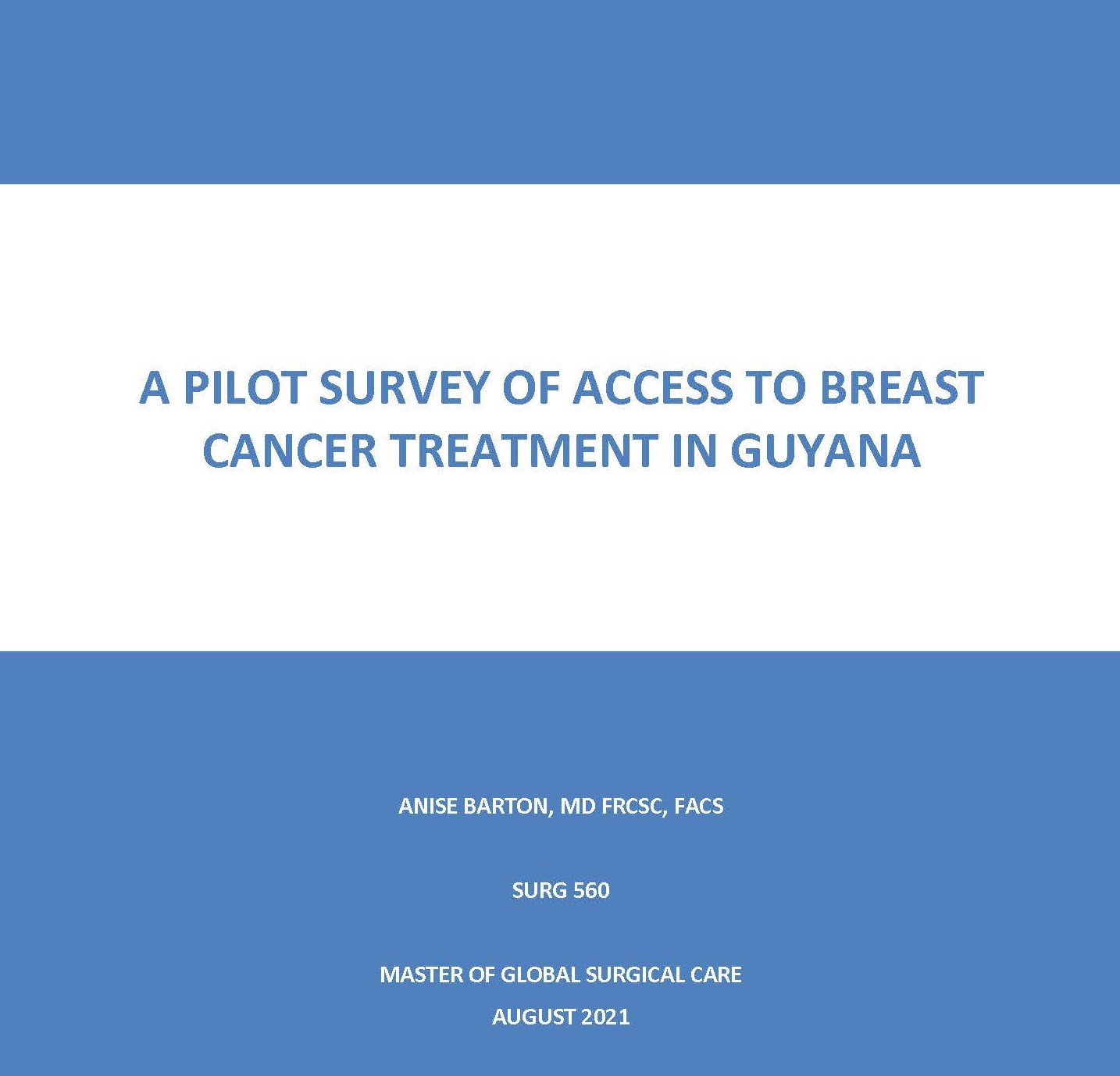 Anise Barton, a student of the MGSC program, recently published their SURG 560 final report to UBC cIRcle. This report is a summary of the final practicum project “A pilot survey of access to breast cancer treatment in Guyana” conducted January 2019 – Aug 2021.

Background: Breast cancer is becoming more common in low and middle-income countries (LMICs), and it is predicted that the burden of breast cancer will continue to increase in LMICs over the next couple of decades (Brand et al., 2019; Ogunkorode et al., 2017). There is a substantial difference in breast cancer survival rates between low resource and higher resource countries. The higher mortality rate in LMICs is thought to be a result of delayed presentation with more advanced stage, and delayed or inadequate access to treatment (Brand et al., 2019; Yip et al., 2008). There is evidence that delays in access to care for breast cancer result in poorer prognosis and higher mortality from breast cancer (Richards et al., 1999; Sharma et al., 2012).
To date, very little has been published in the literature about breast cancer in Guyana. One study demonstrated a high rate of breast cancer in Guyana, particularly among the Afro-Guyanese population (Best Plummer, Persaud and Layne, 2009). Two other studies reported worse prognosis for breast cancer in women of the same ethnic origin living in Caribbean countries, including Guyana, compared to women living in the US (Brown et al, 2017; Taioli et al, 2010). Hormone receptor testing became available in Guyana in 2016, and that 46% of breast cancer patients at the Georgetown Public Hospital (GPHC) were found to be triple negative (Solomon and Motilall, 2019). Globocan statistics from 2018 reveal that breast cancer is the most common new cancer diagnosis in women in Guyana (Globocan, 2019). To date, a full survey of breast cancer treatment in Guyana has not been published.

In summary, the literature indicates that breast cancer is a significant burden in Guyana, and that women are more likely to present at a late stage with triple negative disease. Further documentation is needed to determine the stage of presentation and prognosis for women with breast cancer in Guyana. Along with this, the availability of treatment options and causes of delays need to be studied in order to advocate for needed changes to improve the treatment of breast cancer.

Study Overview: In this pilot survey, the study team attempted to determine the resources available in Guyana for the treatment of breast cancer using a survey of health care professionals involved in breast cancer care. Due to limitations related to COVID delays, and closure of the research ethics board in Guyana, they were unable to perform the survey as planned. However, the survey was administered to the general surgery residents at Georgetown Public Hospital in Guyana, and the results are compiled in this report. Patient related factors impacting the access to breast cancer care include lack of knowledge and education along with cultural beliefs, resulting in delayed presentation. Institutional limitations to breast cancer care in Guyana include the lack of publicly funded radiation therapy, limited medical oncology resources, the lack of a multidisciplinary team, the lack of pre-operative receptor status, delays in pathology results, lack of sentinel lymph node dissection (SLND), and delayed access to the operating room. In the past six months since the survey was administered, several positive steps have been made to move towards earlier detection and treatment, including a screening program, core biopsies being done by radiology, and proposals for a breast clinic and implementing SLND.